It has been said that the O’Connor Family Dromultan lived on the farm ‘Below the Church' beside Scartaglin Village before they settled at Dromultan.  It is thought that John O'Connor who Married Hanora Browne (From ? Mullin Scartaglin) is the first recorded member of our Dromultan O'Connor Family. John/Hanora had the following children - Daniel (B1852), David B1853, Edmond B1855, Elizabeth B1856, John B1858, Joanna B1859 and Hanora B1861. One of the boys died young and tragically when a shotgun discharged accidentally. He and a 'servant' lad had seen rabbits and then both ran to get a gun that was kept in a ditch. In the race the gun went off and one of the O'Connor boys got shot and died.

Name O’Connor/Connor in the Castleisland Parish 1827 in the Tithe Books.

Griffith's Valuation Records for the Dromultan area are captured in both the Castleisland and Killeentierna GV Records. The GV Maps and Books show the split.

John O’Connor who in Feb 25th 1852 married Hanora Browne (From ? Mullin Scartaglin)  is the first recorded member of our O’Connor Dromultan Family. They had the following children: Daniel BDec1852, David B1853, Edmond B1855, Elizabeth B1856, John B1858, Joanna B1859 and Hanna N1861. Edmond married Bridget Brosnan (Clune Kilquane Cordal ) circa 1885 as both are recorded in the Census 1901/1911. Edmund & Bridget are recorded in 1911 as married for 26 years with 8 (8/8) Children. He therefore married Bridget Brosnan in circa 1885.
Refer Family O'Connor Dromultan page for additional details.

All Names at Dromultan, Castleisland & Killeentierna in Griffith’s Valuation Documents. 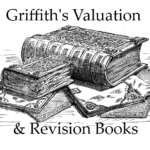 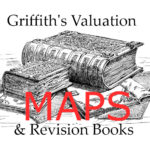 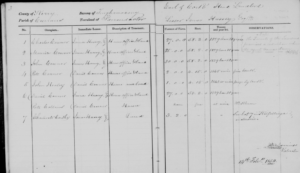 To Be Added Soon

Click HERE or on the Image to read on:
The Field and Tenure Books for the Connor Family
(Including Maps) from:

FYI - Some of the PDF documents referenced on this page are quite large and may take some time to download.

''....The printed volumes of the Primary (or Griffith’s) Valuation, the record of Ireland’s first comprehensive property tax, have been available online for many years now, and are a crucial part of the genealogical infrastructure for the mid-nineteenth century. The records which underlie and inform the printed valuation have never been digitised until now, and they contain more information about households and landholding than can be found in the printed version. There are four distinct kinds of books involved with a General Note to start and then move on to the four book descriptions linked below....''

In Relation to the townlands Dromulton (Castleisland & Killeentierna Parishes Separately) - for the years circa 1858 - 1977 - we have obtained the Griffith's Valuation Revision Records from the Valuations Office in Dublin thanks to Stephen Nolan who works there. Those documents are very informative and make for exciting reading.
We attach a link to those documents below - in PDF format - for you to explore with relevant maps for that period - in addition (above) to the original 1853 Griffith's Maps for cross-reference. In the Revision Record documents, look across to the 'Observation' column for the associated details and the year of reference for that particular line event.

NOTE: As time progressed from 1853, when the tenant/landlord details changed and an old valuations record was changed/updated, a line was simply drawn through the old entry on the Griffith's Valuation Records and the new record entry was written in above the old posting. Similar Ink colour and pen type & print is important to distinguish and help in linking related events. We will be adding to the narrative in this section as soon as we better decipher and understand those Revision documents. The revision documents allow us to attach a timeframe to where/when our O’Connor ancestors rented/farmed land.

The Griffiths Revision Records are the most interesting ancestral records and provide actual records of where/who Rented/Inherited/Owned/Sublet land post 1858 and in most cases up until 1977. The MAPS are also very valuable evidence as you can determine where exactly families lived and farmed land. That information is now accessible below for the 'townlands' of Dromulton.