Click HERE: Read on the O'Connor Currans / Cordal Ancestry.
Link will be activated once permission is sought & granted. 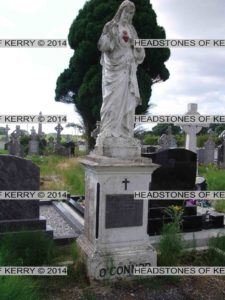 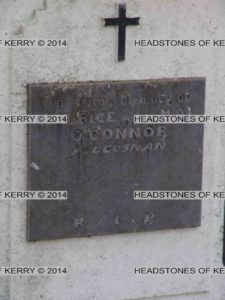 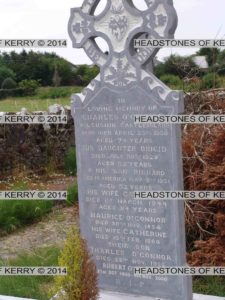 Waikumete Cemetery in West Auckland:
Daniel and Mary Behane O’Connor’s sons did them proud!  By far the largest monument in the block.  Made of white marble as it hasn’t grown with fungus as granite does.  The main part of the column is over 2m high and there was a cross with a decorative base on top which is broken and has been placed at the base of the monument.  Buried in this area are:

Four brothers, Charles, Jeremiah Daniel, Timothy Beehane, and Maurice are buried in the same family area at Waikumete Cemetery along with their parents, Daniel and Mary O’Connor (nee Behane): Roman Catholic A 7 5-8. Also, Jeremiah and Timothy’s wives, Mary Jane and Helena Agnes, along with Timothy and Helena’s daughter, Margaret Mary Alacoque, and Jeremiah and Mary Jane’s son (only child), Maurice David (died aged 5 yrs.).  Also buried in this plot is a Timothy O’Connor (c.1894-1933), who was a grandson of Daniel snr and Maurice snr’s brother Charles Patrick O’Connor, who came out to NZ in the mid-1920s.

Not far from this grave is that of Patrick and Maurice O’Connor, sons of Maurice O’Connor and Catherine Behane, and members of their families. O’Connorgrave3 has Patrick’s grave, along with that of his wife, Hannah, and children , William John, Theresa, Catherine, Ellen/Irene/Eileen, Henry Arthur, and Mary - all buried at Waikumete Roman Catholic A 5 10-12.  The writing was pretty hard to photograph/ not distinctive enough to be picked up in the light. Maurice and his wife, Mary Josephine, are buried at Waikumete Roman Catholic A 9 69 (no headstone). 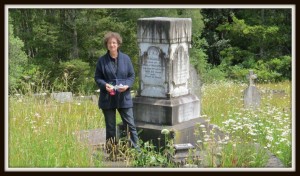 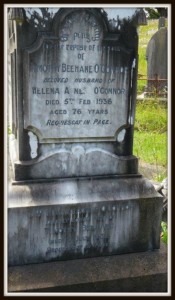 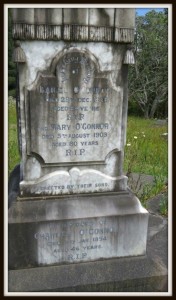 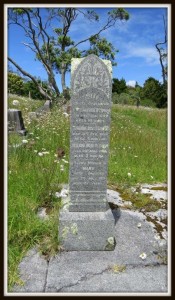 "O'Connor, with its variants Connor, Conner, Connors etc., comes from the Irish Conchobhair, from the personal name Conchobhar, perhaps meaning 'lover of hounds' or 'wolf-lover'. This was one of the most favoured of early Irish names, and gave rise to the surname in at least five distinct areas, in Connacht (O'Conor Don), in Offaly (O'Conor Faly), in north Clare (O'Conor of Corcomroe), in Keenaght in Co Derry, and in Kerry (O'Connor Kerry). The Offaly family take their name from Conchobhar (d.979), who claimed descent from Cathaoir Mor, a second-century king of Ireland. They remained powerful in their original homeland until the sixteenth century, when they were dispossessed of their lands. The O'Connor Kerry were chiefs of a large territory in north Kerry, displaced further northwards by the Norman invasion to the Limerick borders, where they retained much of their power down to the seventeenth century. Today, the descendants of these O'Connors are far and away the most numerous, with the majority of all the many O'Connors in Ireland concentrated in the Kerry/Limerick/Cork area. However, the most famous of all the O'Connor families is that which arose in Connacht. The ancestor from whom they take surname was Conchobhar, King of Connacht (d.971), and direct ancestor of the last two High Kings of Ireland, Turlough O'Connor and Roderick O'Connor, who ruled through the twelfth century. Unlike the vast majority of the rest of the old Gaelic aristocracy, the O'Conors of Connacht managed to retain a large measure of their property and influence through all the calamities from the seventeenth century on. The line of descent from the last Chief of the Name is also intact; the current 'O Conor Don', recognized as such by the Chief Herald of Ireland, is Denis O Conor. The family seat remains in the ancestral homeland, in Castlerea, Co Roscommon." Thanks to : Eolas na hEireann 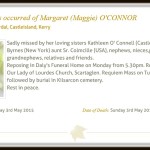 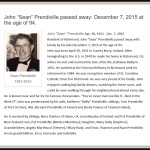