Elements of the Family tree are deducted from evidence of associated families of the Curracity locality.

Primary names were 'Brien' and 'Crean'. We learn a lot from the family occasions regarding those two names in that locality. It seems the Crean Family lived around Farrankeal and were very prominent in Killeentierna at that time. A Nicholas Crean is recorded as Head of The Family at Farrankeal in 1901 aged 58. My Grandfather GL1 David Fleming is recorded there at Farrankeal in 1901 aged 26 as a Cousin to Nicholas Crean. It is reported that this Nicholas Crean died at Farrankeal. GL1 David Fleming had become Head Of The Family at Farrankeal by 1911. From the evidence, Catherine Fleming who is a sister to GL-1 John Fleming married a Nicholas Crean circa 1835. They had at least three children: Nicholas B1838, Mary 1844 and David B1848. This Nicholas Crean B1838 is most likely the Nicholas Crean recorded aged 58 at Farrankeal. So GL1 David Fleming and Nicholas Crean were indeed cousins. Another sister of GL-1 Catherine and GL-1 John Fleming who was Hanora and she married a John Crean. They had a child Cornelius. Another GL-1 sibling, GL-1 Eleanor 'Ellen' Fleming married Charles Brien at Beenatavaun circa 1838. They had eight children. From the evidence GL-1 John and Mary (Nolan) Fleming lived at Curraross close to Curracity.  When you examine the Griffith Valuation Documentation for the Curracity locality circa 1853,  a John Fleming resided as a Landowner at Curraross. Curraross is near to Beenatavaun where the Briens lived and close to Farrankeal where the Creans were prevalent. There was an extremely close interaction between those three families circa 1825/1850.

It is striking to note that in 1901 there remains but 'one Crean person in all of Killeentierna and  that is Nicholas Crean Head of the Family' at Farrankeal age 58 in 1901.
Nicholas is First Cousin to David and aged 58 in 1901. Nicholas died in 1907 and the Flemings purchased/inherited Farrankeal.
David 'Dave-Dave' Fleming is recorded in the 1911 Census as Head Of the Family at Farrankeal.

Moss Keane records in 1996 that ...
‘’The Creans came originally from Farrankeal and were ancestors of Paddy Bats, Bradleys, & Butlers according to Mick Culloty. The family were evicted C1860 and the name disappeared from the locality. They were connected to the South Pole Crean in Annascaul’’
Moss Keane records that the Creans were evicted from Farrankeal in circa 1861. That is interesting as Nicholas Crean was up in court in Clonmel in 1861 accused or orchestrating a plot to Murder Rev Arthur Herbert.

A Nicholas Crean was in Clonmel court in 1861.

Nicholas Crean must have been a popular man as he acted as Baptismal Sponsor to many Children of the Flemings, Briens & Creans. He died Aged 60 on Feb 23 1907 at Killeentierna of Chronic Bronchitis Pneumonia Hypostosis. Jeremiah Sullivan was present at Death at 'Rathanane' - possibly s/b Rosanean. 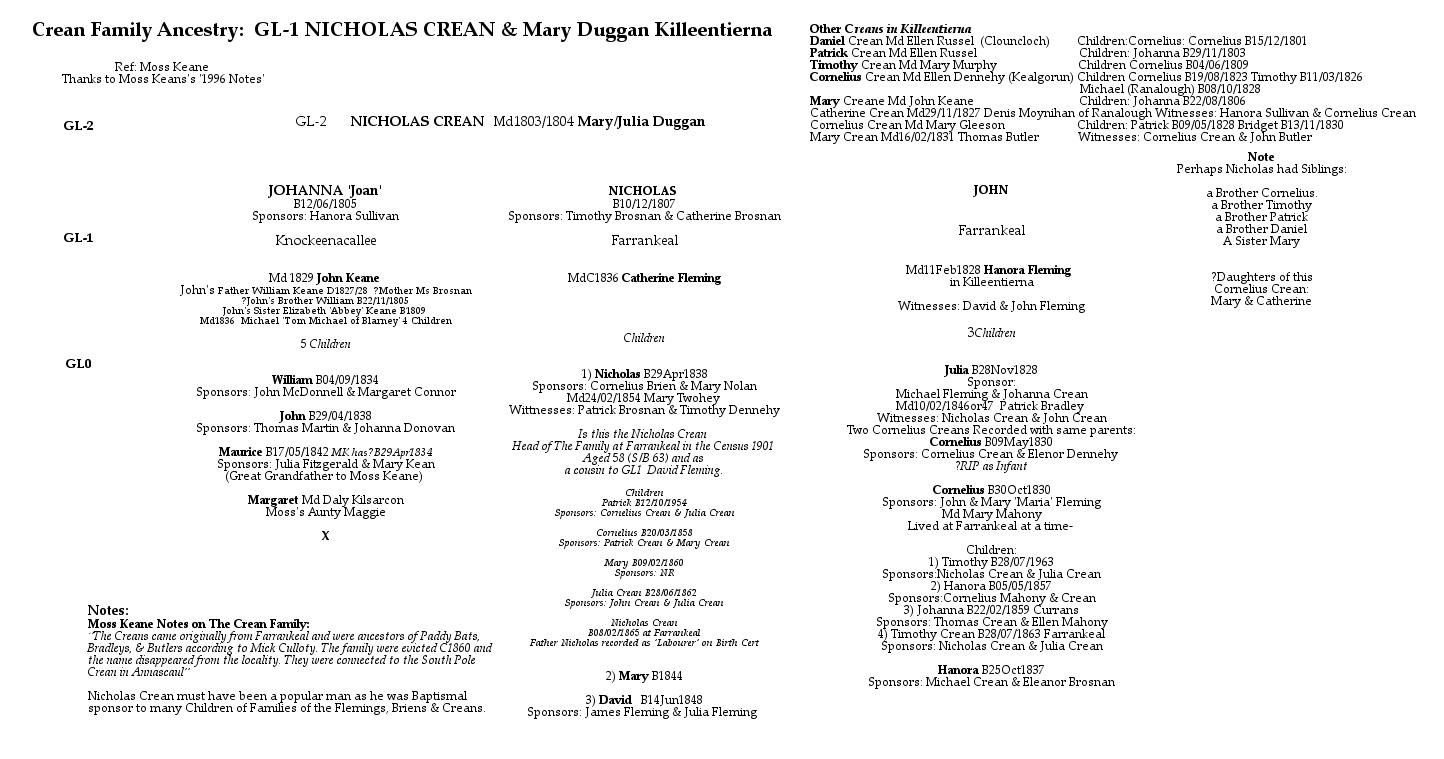 A Nicholas Crean was in Clonmel court in 1861.

A plot to murder Rev. Herbert was tried in the crown court at Clonmel in 1861 when Nicholas Crean was charged with soliciting Daniel Gleeson to carry out the crime (Freemans-Journal. 12 & 13 March 1861).

More on the Herberts: 1836-1878 Thomas Herbert (1805-1878) Second son of Rev Arthur Herbert, vicar of Killaha and vicar of Kilmacabea, Co. Cork and Mary Herbert, youngest daughter of Thomas Herbert of Muckross. Grandson of Rev Arthur Herbert (rector of Tralee 1758-60). Married Wilhelmina Jones and had issue. One of Rev. Herbert's sons, Arthur Edward Herbert, was murdered near Castleisland in 1882; An account of this can be found in The Herberts of Currans and Cahermane at www.lulu.com. (Ibid p21. The volatility of the period is illustrated in the assassination of middle-aged kinsman, Arthur Edward Herbert of Killeentierna in 1882. Mr Herbert was returning from his duties as a magistrate near Castleisland when he was shot dead. The murder was widely covered in the press, including The Kerry Sentinel, 31 & 4 April 1882; The Kerry Evening Post, 5 April 1882; The Graphic, 15 April 1882; Freeman’s Journal, 1, 4, 5, 6 April 1882 & 9 Jan 1883; Daily News, 3 April 1882; York Herald, 5 April 1882; Leeds Mercury, 6 April 1882; Berrow’s Worcester Journal, 8 April 1882, North Eastern Gazette, 20 December 1883; Belfast News Letter, 6 June 1883)

Rev. Herbert died at Killeentierna Glebe on 13 February 1878. His widow died at The Blennerhassett Arms Hotel, Tralee on 25 March 1887 aged 86.
Two poems, “The Ballad of Arthur Herbert’ and an 'A-Z' verse which begins 'A for poor Arthur who thought he was smart/B for the bullet that went through his heart", are held in the Michael O'Donohoe Collection, Castleisland. 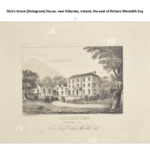 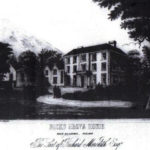 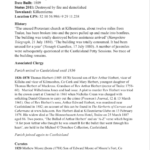